Building upon the recent momentum from expansion announcements in late 2020, global hospitality company Hakkasan Group reveals further growth with its flagship Hakkasan brand with the announcement of two new locations in Turkey. These new restaurant venues are in partnership with Alfardan Group, a leading hospitality and development company with a strong presence throughout the region and Astas Holding an exclusive lifestyle developer in Turkey.

This further collaboration will launch the first Hakkasan to open within Mandarin Oriental Bodrum, currently scheduled to open summer of 2021. Then to follow shortly thereafter, Hakkasan in Mandarin Oriental Bosphorus slated to open in the later part of 2021, making the Turkey outposts the 11th and 12th worldwide locations for Hakkasan and providing evidence of the brand’s loyal following and affinity across the globe. Hakkasan Bodrum will be an open-air restaurant with sweeping views of the Mediterranean Sea. Hakkasan Istanbul will sit overlooking the Bosphorus, providing 180 degree sights of the scenic waterway.

The internationally renowned restaurant brand, which combines award-winning cuisine and cocktails with a unique soundtrack and service experience, was originally launched in Soho, London in 2001, followed by Mayfair, London in 2010. Both London locations have each earned and continue to hold a coveted Michelin star. The Hakkasan global footprint has expanded to multiple restaurant locations around the world in the United States, Middle East, India, Asia and Europe.

Recognized as one of the most influential Chinese restaurants in the world, Hakkasan looks forward to evolving traditional Cantonese cuisine and bringing contemporary flair to the dining scene in both Bodrum and Istanbul. Guests will enjoy an unmatched dining experience at Hakkasan with elegant, yet experimental cocktails, indulgent dishes from the kitchen and an alluring ambiance that sparks anticipation for the entire dining experience. 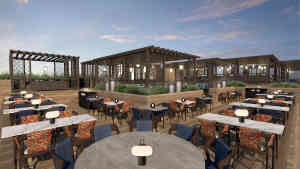 “We know diners within exciting markets such as Bodrum and Istanbul demand more than an average night out. We are thrilled at the prospect of bringing the finest modern Cantonese menus and a luxury experience that can only be found at Hakkasan to Turkey through expanding our partnership with Alfardan Group and launching a new relationship with Astas Holding,” said Angela Lester, Hakkasan Group’s Executive Vice President of Business Development. “For years we have pushed the boundaries of what to expect from our restaurants. We look forward to sharing our evolving Hakkasan philosophy with even more people throughout our continued growth in the region.”

With a proven track record for creating restaurants that exude confidence and allow diners to transcend to a different world enveloped in intrigue, mystery and excitement, Hakkasan Group and Alfardan Group will build upon its longstanding partnership and prior work since opening Hakkasan Doha in Qatar in 2013. The Turkey projects shortly follow the recent announcement of the 10th Hakkasan location at St. Regis Al Mouj Muscat in Oman.

’’The partnership between Alfardan Group, Astas Holding and Hakkasan Group is drawn on international experience and connections bringing together our combined expertise in creating exclusive luxury services,” said Omar Hussain Alfardan, President and CEO of Alfardan Group. We all have a shared commitment to offer unforgettable memories to our customers creating these one-of-a-kind moments.”

The Chairman of the Board of Astaş Holding, Mr. Vedat Aşcı, has stated “In the cities of Istanbul and Bodrum, which have been preferred by the world’s elites for vacation, with the partnership and cooperation of the strong experienced Alfardan Group and Hakkasan, blended with European and Asian warmth, we are very pleased to offer a unique experience to the Turkish and the world elite. I believe that Mandarin Oriental Bodrum and Mandarin Oriental Bosphorus Istanbul will enchant the guests with their service quality, unique menus, and wonderful flavours to be offered with both Hakkasan restaurants we will open.”